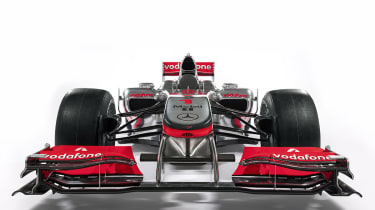 This week marks the beginning of a new season of F1 theatrics, as cars and team liveries are revealed for 2010. Fernando Alonso has been snapped testing his new Ferrari - dubbed the F10 - during testing at the Paul Ricard circuit in France. New sponsor Santander is the prominent name on the car, with white front and rear spoilers contrasting against the classic Ferrari red.

Changes for this year include a double diffuser, bumps similar to the RB5 Red Bull car of last year, and high end plates on the front wings like the championship-winning Brawn car from ’09.

There’s also a larger fuel tank, necessary because of the no-refuelling rule being enforced in ’10.   Mercedes has also taken the wraps off its latest livery its Stuttgart Motor Museum, prior to unveiling a new car (dubbed MGP W01) in Valencia on February 1. The ‘Silver Arrows’ are back, and with the return of racing legend Michael Schumacher to partner Nico Rosberg, this is a team to look out for. The re-branded Brawn GP will debut its car alongside Williams, who plans to launch its racer at the same test. McLaren has revealed its 2010 challenger for the Formula 1 title, the MP4-25.

Said to have a ‘radical aerodynamic overhaul’ over last year’s MP4-24, McLaren hopes its double world championship-winning driver line-up will complement the changes made for this season. It can’t get a whole lot worse than last year’s attempt, can it?  January 31 marks the launch date for BMW Sauber and Renault in Valencia, Spain.

Toro Rosso, the sister team to Red Bull racing, will be launching its car on February 1 in Valencia at the Ricardo Tormo circuit. Confirmed drivers Jamie Alguersuari and Sebastaien Buemi will be in attendance.  Spain’s Jerez circuit is the location for the Red Bull and Force India launch on February 10. Lotus is expected to show its brand new car on February 12, while the new US GP team plans a low-key unveiling on American shores some time in early February. Argentine driver Jose Maria Lopez has been confirmed as one of the fledgling team’s drivers. We’re still waiting to hear about launch dates for newcomers Virgin and Campos, and Red Bull’s sister team Toro Rosso.  2010 should be a hugely entertaining year for Forumula 1, with some intriguing driver changes and an onslaught of new teams injecting ever more unpredictability into the sport. Of course, evo will be following the action throughout the year. Keep your eye on evo.co.uk for updates.