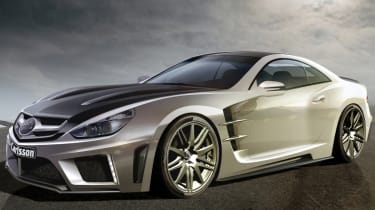 It’s a Mercedes SL600 but not as we know it. Carlsson, the German tuning company best known for its ability to liberate extra speed from fast Mercs, will show this, the C25 coupe, at the Geneva motor show. It uses the familiar bi-turbo 6-litre V12, but with the dial turned up to 11, resulting in power outputs of 753bhp and a disconcerting 973lb ft of torque. To save you the bother of looking it up, that’s 51lb ft more than a Bugatti Veyron hypercar. Preventing the clutch and five-speed automatic gearbox from detonating itself, torque is limited to a piffling 848lb ft at low speed, although that’s still enough for a 0-62mph time of 3.7 seconds. Top speed is 219mph.  Only 25 will be built (hence the C25 moniker) and in an unusual twist to guarantee exclusivity only one will be sold in a country – so if you fancy being the UK’s sole owner of a C25, get on the blower to Carlsson, and be prepared to front up over half a million in readies (more accurately £504,075 with taxes).  Hang on a sec. A converted SL600 with more power and a hard top in place of the convertible’s folding roof? Sound familiar? Mercedes will already sell you one themselves: it’s called the SL Black and it’s half the price.