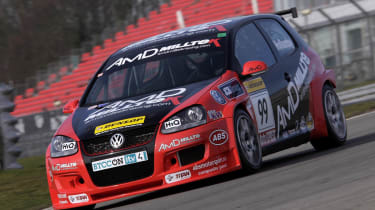 The British Touring Car Championship is up and running for 2010, with the new season launched at Brands Hatch.

It’s an official testing day for the drivers and teams, with the first round of the season just over a week away, on Easter Sunday at Thruxton.

And it’s been a bit of a merry-go-round in the pre-season, with a number of driver changes alongside the arrival of new cars, teams and technology. The last two series champions, Colin Turkington and Fabrizio Giovanardi, are absent from the 2010 driver line-up.

Plato’s confident the Cruze can help him surpass Andy Rouses 60 BTCC wins record, too (Plato has 53) – ‘we’ve done half a day’s testing at Oulton Park, and early indications are it’ll be very quick. I’ve been a runner up enough times to know BTCC is a tough thing to win, though.’

Volkswagen returns to the sport for the first time in 21 years thanks to AmD Milltek’s mkV Golf GTI while Team Aon’s brace of Ford Focuses, driven by Tom Chilton and Tom Ounslow-Cole, will run on LPG gas.

‘I’ve never done so many test days!’ says Chilton. ‘The development team have really gone to town to get it sorted. It hasn’t quite got the punch of a petrol engine but that’s why we’ve got a turbo. Pit stops have been the only problem, the crew think LPG’s more dangerous to refuel, but it’s not’.

Dunlop returns as the BTCC’s main sponsor, and has committed until 2014, and has developed a new Sport Maxx BTCC tyre, which has impressed the drivers during early testing.

‘Dunlop’s produced a miracle’, reckons Plato. ‘The tyre’s quicker and it lasts longer, and it doesn’t fade after three or four laps’. The tyre comes fitted with a small microchip, allowing series organisers to keep a track of who’s using which tyres, and also giving teams the chance to analyse tyre performance during race weekends.