Roger Green at the Ring 24 hours 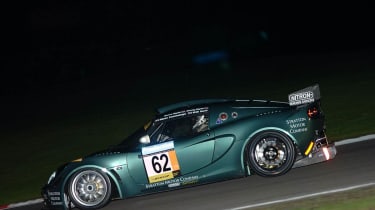 The Nurburgring. The Green Hell. The world's longest and most challenging race track. Of course we love it, ask anyone who's been there and they'll tell you how absurdly addictive it is. But it's one thing to go on a public day and drive your own car around, quite another to compete in the fabled 24 hour race against 230 other cars.

This year three of those cars will have evo team members in them. Here you can keep a track on Roger Green's progress in his Lotus Exige. Updates work from most recent at the top. Times are CET German time, so chop an hour off for BST...

That was it for updates from Rog. Until this rather major one during his first stint in the car during the race... Happily, he's absolutely fine. Though no doubt we'll be sick of hearing about it by the time we're back at the office next week...

Busy day. Car arrived courtesy of truckie Tim but the rest of the team don’t arrive until later this evening, which meant we had to put the awning up, spruce everything up and get the car and ourselves through scrutineering (I expect Meaden and Harris have been have massages). Car looks fantastic, I’m very keyed up now. Spent about an hour queuing to get my kit checked out, but as the weigh you too it’s a process ever driver has to go through. Klaus Ludwig was behind me, and there was no way was I letting him through. Free practice and night qualifying tomorrow!

We’re all signed on! Our car doesn’t arrive until 8am tomorrow, but all the admin has been done and when we signed on they gave us a medal. Which was nice. The weather is truly appalling, the cloud base is on the ground and it’s raining hard – the little 260 Cup was aquaplaning all over the place, those campers must be a hardy bunch. The paddock is filling now with trucks, cars and everything else. The race feels like it’s close now.

Quiet start to the day. Went for a walk earlier up three extinct volcanos – never knew they were here. Should be able to sign on later today, so heading over to the track again shortly.   Monday May 10. 5pm

Race back to the hotel, some 15 miles way in Daun, with Matt chasing hard in his hire car, some of the roads around here are as good as the track itself. Of course he has little chance of keeping, especially as his Golf had all my kit in it. Driving over to the ‘Ring two-up would have been impossible without a second car, the toothbrush-sized isn’t workable when you need to bring race kit as well as civies and the lack a stay for the engine/boot cover makes packing a trick business. The run over was a terrific way to set the seen, though, I’ve spent quite a bit of time driving Exiges recently. Last week I was at Watkins Glen in one, but I can’t wait to see the racer when it arrives on Wednesday, I’ve only been sent pictures on my phone so far and it looks stunning. There are also some very tasty trick bits fitted inside, but more on that later.

Meet up with Matt Cummings the owner of our race Exige and he’s as excited about the week ahead as I am, unlike Dickie and Monkey, this is my first race in the 24, I’ve never even been over to see an event, so this all very new to me. With no track action I head over the ‘Ring Weld’, the new museum complex. I’ve not been in there since they rebuilt a whole new complex last year, and it turns out to be decent way to kill a couple of hours. They have a cinema showing a film of the N24 in 4D, which basically means you wear the silly glasses and get wet every time it rains on the screen.

Unlike the Meaden and Harris I don’t have a works drive. I’m in a three man team driving a Lotus Exige Cup and for the record the stats are as follows: 840kg, 260bhp, 70-litre fuel tank and it’s being run by Long Stratton Motor Company. Driving with me are Matt Cummings - owner/pilot and Gavan Kershaw – Lotus development driver. We’re going to be busy and none of us have raced in the N24 before...

After driving over yesterday evening in an Exige 260 Cup I arrive in the hope that we can blag our way onto an Aston trackday to give ourselves a little warm up, but the circuit is covered in a blanket of seemly impenetrable fog. Its cold too, so after a coffee with Meaden and his Aston cronies I head off to Brunchen to see what it’s like over on that side of the track and am amazed to see the campsites already full! Huge scaffolding viewing platforms are already up and I spot a bloke who’s rigged up hot water shower. It consists of some copper pipes over a fire, connected to a pump and tubing. How long have these people been here?

Roger Green is blogging from the Ring. Read his efforts here

All of our Nurburgring 24 hour content is this way...