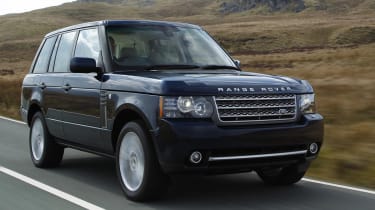 The less important one is the Autobiography Black, a limited edition to celebrate the anniversary. Nothing much to report except it’s jet black, has a full complement of whistles and bells and around 700 will be made.

Of more interest is the 2011 model year car which now features a 4.4-litre (up from 3.6) TDV8 diesel and the new eight-speed ZF gearbox as used by BMW, amongst others. This is noteworthy not just for its power and performance improvements, but because of where else in the Jaguar Land Rover empire it might be used.

For the time being what matters is that it develops 309bhp and 516lb ft from 1500-3000rpm and gets itself to 60mph in 7.5sec, while returning 30.1mpg on the combined cycle. Not bad for something that weighs two and three-quarter tonnes. It’s still in the top CO2 band, though.In addition the Terrain Response system has been modified, and new options include electric reclining rear seats and a 1200 watt Harman Kardon stereo.

That’s not all, though. Roger Green has been driving the Range Rover across Wales and you can read about his experiences here, while Ollie Marriage has been racing a Land Rover Freelander against a plane...

A brief history of the Range Rover