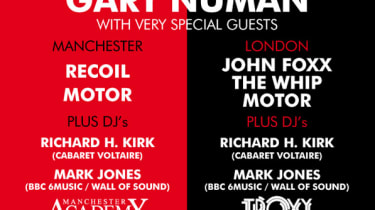 What’s currently in the Numan garage? And is it true you’ve got a Smart?

My wife had a Smart but we've sold it now. I have a Jeep Commander, a Howie 650 Dirt Buggy and my wife has a Chrysler PT Cruiser cabriolet. I also have a motorbike. Since the children came along my cars have become more school run than trackday which is a little frustrating. I'm thinking about getting a Caterham though, there's a lovely one for sale not far from my house. Disgusting colour though.

What inspired you to write ‘Cars’?

Many years ago I was driving through London and got stuck in some traffic. Two men got out of the car in front and started shouting at me and kicking my car. I guess I must have cut them up or something. I quickly locked the doors of my car, which seemed to annoy them even more for some reason. They were getting really violent, trying to break my windows to get to me, so I drove up on the pavement, scattering pedestrians as I went, and got away. From that moment onwards I have seen the car as a tank for the civilian. It keeps us safe, locked inside a bubble of security. The song is about that feeling of security.

Do you still own a TVR? What are your memories of your TVRs?

I had a 4.5-litre Cerbera but I sold it quite a few years ago. I really loved that car but it was just stupidly unreliable. Spending a lot of money on a car is fair enough, if it's spent doing fun things, but not when it was just to try and get it to work at all. Exciting car though. It's just that as you are hurtling around the track at some silly speed and the air con pipe falls into your lap you can't help but wonder what else might fall off, something more important perhaps. It makes you doubt it and that lack of confidence got on my nerves. It was seriously quick though and nowhere near as scary as some people claim them to be.

What was your first car?

A Morris Marina estate, so I've seen motoring from both ends of the automotive spectrum. I loved that car though. Less cool than a fart in Jesus' tomb, something my wife actually did, but it changed my life when I was a 17-year-old boy. Favourite cars you’ve owned and why? (did your record company buy you a Corvette when ‘Cars’ became a hit?...)

They did buy me a Corvette. Someone told them I had been talking to another record label, which I had not, and so they bought me the car on the condition that I stayed signed with them. Total result! A favourite car that I've owned would be a Ferrari Boxer. A had a 512 BB for a while and that was a great car. I used to take it to Heathrow nightly and drive up and down the tunnels in and out of the airport with the window open to listen to the engine. Just turning the key would start up a range of pumps. It felt like it was coming to life.

With the shift towards alternative fuels, have you considered releasing a mash-up of Cars and Are Friends Electric, calling it Are Cars Electric?

No but that's a great idea. You should suggest that to one of the car manufacturers. That would pay for my Caterham I would think.

Do you still find the time to fly your own aircraft?

Once the children came along I sold the aeroplane to a flying club in Sussex so I fly very rarely these days. I don't really get the time for flying anymore. If you wake up to a nice sunny day the children seem to decide where you go and what you do. I miss flying though. I'm thinking about getting back into it next year and introducing it to the children. If they love it my problems are over.

Gary Numan stars at Back to the Phuture Live. Details and tickets here

Do you have any experience of racing cars?

Yes, a few years ago I took part in a Sky TV series called The Race where they took a number of celebs, taught us over a week how to drive a variety of racing cars and then let us race each other each day. It was one of the best things I've ever done and I won the overall competition. As well as that I did another TV series for Men and Motors, called Gary Numan's Cars predictably enough, and got to drive a number of fantastic cars in that as well, including a Palmer Audi and an old F1 car. What's the biggest thrill, playing to a crowd of thousands or driving a TVR in the wet?

All these things have their moments. I remember being in a formation of four World War 2 aeroplanes at an airshow once when turbulence spat me upside down about 4 feet away from one of my team mates, and only about 50 feet above the ground. That was exciting. I was in a Russian WW2 fighter once when bits started falling off it and flames appeared. That was REALLY exciting. I've also looked out from the stage at crowds of 50,000 people and felt like I had the best job in the world. But, for sheer 'you are about to die' adrenaline rush I'd have to go for the TVR in the wet.

Did you know that a worker at the TVR factory sprayed a stencil image of your face on the underside of dozens on new TVRs?

Yes, I've met him a few times. I was always rather proud to know that TVRs driven by me probably had my little face on them somewhere. Have you ever got out of a speeding offence by being who you are? I tend to think I've been let off by being incredibly polite and apologetic. If you get caught you have to put your hands up and admit it. Getting grumpy will get you nowhere and saying shit like 'Do you know who I am' is guaranteed to lose you your licence. Having said that, being who I am has got me into trouble more than once. I was once followed across West London by a police van which freaked me out so much, due to the questionable intake of one of my passengers, I crashed into a fence and then fell out of the car. When the officer asked me where I'd been I couldn't remember for the life of me, until he pointed at my Access All Areas pass from The Cure gig that I'd just driven away from. Luckily he just wanted an autograph and let me off the damage.

What are your favourite driving roads?

When you drive a Jeep Commander with three children who think any speed in double figures is too fast, you no longer have favourite driving roads. You just try to find roads that are so bland they have no interest in anything but the DVD. That stops them fighting, that keeps us parents happy. A smooth boring road, is a happy quiet car. God, look at what I'm saying! Is this what life has to offer now that I have kids? A 4x4 and a search for boring roads? What happened to the Rock and Roll lifestyle? Where did it all go wrong?

Are you a bad passenger?

Not at all, everyone else is a bad driver. Especially the person driving the car that I'm a passenger in. I apply my imaginary brake when they should be applying their real one and it annoys me that they don't seem to understand a clear instruction when I give it.

What are your favourite driving tunes?

Anything by Nine Inch Nails will do it for me although, if I'm completely honest, I don't actually listen to music very much when I'm driving. I don't listen to music much at all actually. I do most of my important thinking when I'm driving. Lots of things come together, unless the children are with me of course as that makes thinking impossible. Problems that are bothering me are usually sorted out and solved by a gentle drive, on my own. Don't know why, it just seems to relax my mind somehow.

Money no object, what car would you buy and why?

A Koenigsegg Trevita. I think it's the greatest looking car of all time and it goes like shit off a shovel. It sounds amazing too. Looks, speed and noise. That's everything you could ever want from a car.

What do you think of evo magazine?!

It's the best magazine I've ever read. And that's what all my friends think to. Every one of them. And their wives, and their children. Even people I don't know stop me to talk about it. You should be proud.

Gary Numan stars at Back to the Phuture Live. Details and tickets here