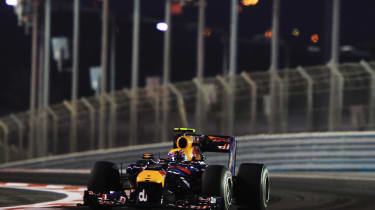 Red Bull driver Sebastian Vettel drove a wonderfully controlled race to win the Abu Dhabi Grand Prix and claim his maiden Formula 1 world title, becoming the youngest ever F1 champion. The Red Bull driver, who was third in the standings going into the weekend, had never previously led the drivers’ championship in his three full years in Formula 1.  He led from pole and saw other results go his way to become the youngest ever Formula 1 world champion at 23 years and 135 days – beating McLaren driver Lewis Hamilton’s record by just 166 days. The championship’s leading duo going into the weekend, Ferrari’s Fernando Alonso and Red Bull's main title hope, Mark Webber, came seventh and eighth in Abu Dhabi respectively. ‘I'm a bit stressed to be honest, I don't know what I'm supposed to say,’ is what you might expect someone to remark if they had just crashed in rush hour on the M25. However, this was exactly Vettel’s reaction having stolen the drivers’ championship away from Fernando Alonso, one of the most successful drivers of the current age, in the last race of one of Formula 1’s most memorable ever seasons.

VIDEO: See Sebastian Vettel try Red Bull's X1 supercar Alonso, who with Webber behind him needed only to finish fourth to be sure of securing his third world championship, fell victim to a disastrous decision by his Ferrari team.  Following an early post-crash restart, Webber pitted complaining of rear tyre degradation. Alonso, in a decision that is likely to come under much scrutiny, also then pitted early to ‘cover’ Webber as his nearest challenger.  Emerging in 14th, just ahead of the Australian, Alonso found himself in traffic behind the Renault of Vitaly Petrov, who he then spent the rest of the race trailing.  Lewis Hamilton, who had a slim title chance lying 24 points adrift of Alonso, finished second and his McLaren team-mate Jenson Button was third. A 16-1 outsider for the drivers’ world championship just ten days ago, the final standings had Vettel top on 256 points, four clear of Alonso in second, 14 above third-place Webber and 16 in front of Hamilton in fourth.  Although only his fifth win of the season, Vettel’s victory secured Red Bull’s double of both drivers’ and constructors’ championships – the latter secured by Vettel's victory at the penultimate Grand Prix of the season in Brazil. However, had the Championship finished last month it would have been a very different story with Vettel’s season likely to have been characterised as one of immense frustration following numerous problems with his car.  From faulty spark plugs in Bahrain to total engine failure in Korea (which handed victory to a grateful Alonso) with everything from loose wheel nuts in Australia to problem brakes in Monza and Spain in between, you could have certainly forgiven Vettel for any disappointment.

VIDEO: See Sebastian Vettel try Red Bull's X1 supercar   The son of a carpenter born in a small town in West Germany in 1987, Vettel raced karts and competed in Formula 3 before joining BMW Sauber as a test driver in 2006, and was released to join Red Bull in the middle of the 2007 season. Inevitably compared to Michael Schumacher - given not only his nationality but also his driving style and his hands-on role behind the scenes with engineers - Vettel has been keen to play down the ‘Baby Schuey’ comparison, stating that he wants to be the ‘New Vettel’ instead.   Vettel’s stunning championship victory at such a young age means that he is already well on his way to achieving that aim.