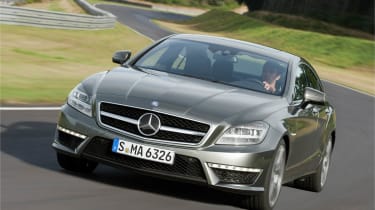 Mercedes has officially unveiled the new 2012 CLS 63 AMG at the Los Angeles Motor Show. Power is provided by AMG’s new 5.5-litre twin-turbo V8 engine (as fitted to AMG’s S63 and CL63) producing 518 bhp and a healthy 516 lb ft of torque in the CLS.  Paired to AMG’s seven-speed Speedshift MCT transmission, the car hits 60 mph in 4.4 seconds with top speed limited to 155 mph.   Mercedes is also offering an optional AMG Performance Package which boosts output to 550bhp and 590lb ft of torque by maximizing charge pressure of the turbochargers (from 14.5 psi to 18.8 psi). The extra power brings the dash to 60mph down 0.1 of a second to 4.3 seconds while the limiter is recalibrated to allow a top speed of 186mph.   In addition to the reworked engine and transmission, AMG has widened the front axle by nearly an inch and fitted its independent adaptive suspension with electronic damping and a three-stage traction control system (Comfort, Sport and Sport+).  The hottest CLS will also enjoy fairly discreet body modifications including modified bumpers, a revised grille, a rear diffuser and the usual four exhaust pipes.  The car will ride on standard five-spoke 19-inch wheels with high-performance cross-drilled brakes.   UK price and on sale dates are yet to be confirmed but Mercedes has confirmed the car will go on sale in the USA next summer. Expect timings to be similar on this side of the Atlantic.