The LA Show is in full swing with new launches from Porsche, Subaru and Cadillac. Huge hi-res gallery here 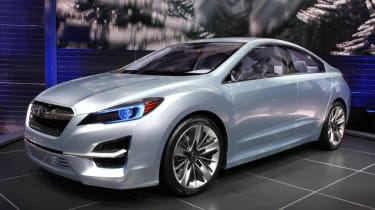 The Los Angeles motor show is fast taking over from Detroit as America's premier show. The American big three still pull out all the stops for the Detroit expo in January, but LA is a more glamorous, international place and so tempts a wider range of marques.

Some of the cars you see here have already been seen at Paris - the new Lotuses for example, the Audi quattro Concept and Jaguar's gorgeous C-X75 - but others are new, including Cadillac's Urban Luxury Concept, and the Subaru Impreza Design Concept.

We've also included some general interest stuff. There were some rather nice posters on the Porsche stand, a few wild things from some of the west coast tuners and a 42" wheel...