The American tuning industry goes mad at SEMA. Find out all about it and see pictures here. 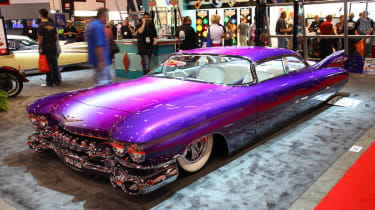 It’s the Speciality Equipment Market Association show this week. Mean anything to you? What about if we abbreviated it? SEMA. The world’s premier showcase for tuned cars, it takes place in Las Vegas and there’s nothing quite like it for the sheer scope and variety of wild and wacky cars on display. We've now uploaded a full gallery of images, which we'd urge you to have a good flick through to see the wilder side of the west coast. The last few pics are all Lexus and Toyota, so if you want to know more about them, read-on, otherwise just have a gawp at what size wheels someone's managed to cram under a Hummer, what they've done to an original 300SL Roadster, that sort of thing.

Lexus gave pride of place to the new CT200h, this one kitted out with 18-inch rims, big brakes, wheels and a load of attitude. It ‘demonstrates what an F Sport version of CT200h might deliver’ says Lexus. Don’t expect them to go ahead and produce it though. Nor the GS450h and LS600h the firm also had on display.

Toyota’s star was a Prius with carbon body panels, ‘Mystic Lavender’ paint and a massive suspension drop. Apparently this helps the model celebrate its 10th anniversary in the USA. The only car with any proper under-the-hood mods was a Yaris with 145bhp (up from 106bhp).