We round up the 2010 Race of Champions, with Plato and Priaulx versus Schumacher and Vettel 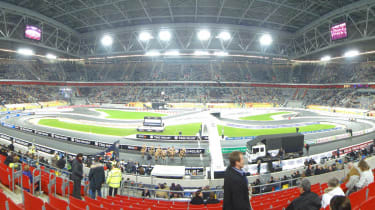 2010’s Race of Champions event was held in the spectacular Esprit stadium in Dusseldorf and proved to be as entertaining as ever, with Saturday’s final for the Nation’s Race of Champion’s Cup coming down to a head to head battle between Germany and Great Britain. Representing GB were BTCC champion Jason Plato and three-time World Touring Car Champion Andy Priaulx, while Germany had the formidable line up of ROC regular Michael Schumacher and newly crowned F1 champion, Sebastian Vettel.  For Plato, this was his second time at Race of Champions and in the final he was drawn against his Nemesis from 2008, Michael Schumacher. It was a close race but in the end, Schumacher came out on top again, so it was down to Andy Priaulx to keep Team GB’s hopes alive, as he lined up against Sebastian Vettel, both driving Audi R8 LMS cars round the tight and twisting circuit. It turned out to be a much closer race than everyone was expecting and much to the disappointment of the partisan crowd, Andy Priaulx managed to just pip Vettel at the line, resulting in a final deciding run-off between Schumacher and Priaulx being needed in the ROC buggies. The atmosphere inside the stadium was electric as the two drivers lined up for this final run. By the end of two laps the result was still too close to call but by the finish line two laps later, Schumacher had done enough to pull out a ten metre gap and win the Nation’s Cup for Germany. (Video below).