What are the new cars going to be like? Will snow throw a spanner in the works? 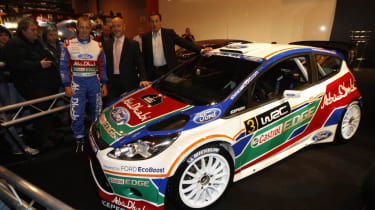 The new WRC Season is about to get underway in Sweden and there is both snow and almost palpable excitement in the air. The shakedown earlier today was the first time anyone has really been able to get an idea of the pace of the new Ford Fiesta and Citroen DS3 WRC cars and, for what it’s worth, it was first blood to the Fiesta. All the drivers had multiple runs through the 4km course and Henning Solberg set the fastest time of 2min2.5sec in his M-Sport Stobart Fiesta. He was just one tenth faster than Ford factory team driver Mikko Hirvonen. Henning’s brother Petter was the fastest of the Citroens in third place and Loeb was just behind in fourth. Jari-Matti Latvala was fifth, while both Kimi Raikkonen in his DS3 and Ken Block in his Fiesta struggled with the snow banks, both leaving the road briefly.

In case you’re not aware, the 2011 season sees the introduction of new regulation cars to the WRC. The essential differences are that the engines are now smaller 1.6-litre turbocharged units, the gearboxes are now six-speed and no-longer paddle operated, and the super-trick differentials have been replaced with simpler mechanical items in the front and rear axles (with no centre diff at all). All this has been introduced to try and reduce costs in the WRC and tempt more manufacturers in, which they've achieved with Mini. The side effect of the rules changes, however, is that the cars should be trickier to drive and therefore more spectacular to watch.

Sebastien Loeb said “I’ve got a good feeling about the car. During testing I’ve been pleasantly surprised by the engine and the overall balance despite the absence of the central differential”. Meanwhile, Latvala was quietly confident ahead of first round: “The Fiesta RS WRC handles well in the snow and the balance is brilliant. It’s shorter, so the weight is centrally located and it reacts quickly. The six-speed gearbox is a big improvement, and I worked hard on perfecting the gear ratios”. His team mate was a little more cautious; “I’ll need to be more committed behind the wheel in the new car” said Hirvonen “ It doesn’t forgive as much as the old style cars, so I need to be firm and tell the car exactly where I want to go. It’s a bigger challenge driving the Fiesta RS WRC, but it’s also great fun”

The cars are not the only imponderables either: Which Sebastien will be faster? Can Hirvonen get his Mojo back? Can a non-Scandinavian win in Sweden? Can Petter beat the Sebastiens? Will Kimi, Ken and Mathew Wilson get near the premier league of drivers? Will Kimi go back to F1? The first proper stages begin at 20.00 local time this evening and fresh snow will make life tricky for the first cars on the road (Loeb and Latvala) as they will be acting like road sweepers, just as they would on gravel. It will be immensely interesting to see how the first rally of the season pans out…