We have all the details of Russia's Ferrari 458 beater 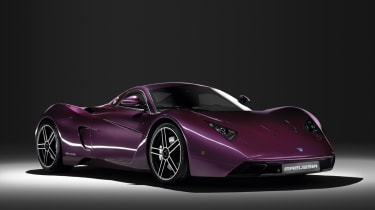 Russia’s first ever sports car was in London last week and we were there to have a look. The Marussia B1 was at the launch of the Marussia Virgin Racing F1 car at BBC Television Centre sharing the Studio One stage with F1 drivers Timo Glock and rookie Belgian Jerome D’Ambrosio (already nicknamed Custard). Also in front of the cameras was David Croft (‘there’s been a cock-up, they said get that DC bloke who commentates on the F1 for the BBC…’) and the founder of Marussia, Nikolay Fomenko, who is Russia’s equivalent of Jeremy Clarkson.

The rear-wheel drive B1 looks absolutely stunning, with a very clean CFD designed body devoid of any wings. There are three engine options, all designed by Cosworth (also suppliers of the engine for the F1 car). The base engine is a 3.5-litre naturally aspirated V6 producing 300bhp and 302lb ft. However, there is also a 2.8-litre turbocharged V6 which is offered in two states of tune: 360bhp and 383lb ft or 420bhp and 442lb ft. None of these seem to quite live up to the looks of the B1 and a 0-62mph time of 3.8sec looks extremely optimistic. Until you consider the weight.

The most exciting thing about the B1 is that it weighs just 1100kg. This means that in its fiercest spec the B1 has a power-to-weight ratio of 388bhp/ton, just out-gunning a Ferrari 458 Italia’s figure of 384bhp/ton. This weight is achieved, in part, thanks to carbon composite body panels. The chassis is an aluminium semi-monocoque tub, to which are attached front and rear tubular spaceframes, while the gearbox is a six-speed automatic with paddles attached to the back of the steering wheel. The top speed is claimed to be a conservative sounding 155mph.

I managed to have a sit in the B1 (not easy as the up-sweeping doors don’t open far enough) and head-room for anyone over 6ft is very tight. The interior is not as well resolved as the exterior, but the Intel Core 2 Duo processor (dummmm dum dum dum dum!) powered touch screen infotainment system looked very good and there are three cameras which not only help low speed manoeuvring but also allow you to record your road trips.

In addition to the B1 there is also a mechanically identical but wilder looking car called the B2, which has an air of the Edonis about its very edgy styling. Three B1s are already running around Moscow doing durability testing and the first customer cars are due to be delivered this summer. The price is expected to be around £110,000.