Touring Superleggera has taken the Gumpert Apollo and given it a thorough makeover. Pictures and video here 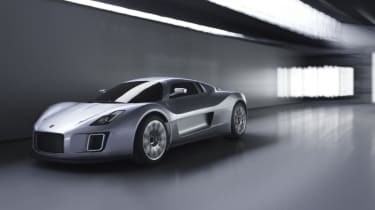 Gumpert has followed up the hugely fast Apollo with the Tornante at Geneva. The car has been designed by Touring Superleggera to produce a far more cohesive and attractive shape than the rather brutal styling of the Apollo. The split rear window is a particularly appealing touch, if a rather shameless rip-off of 1960s Corvettes.

However, though the styling has softened, the power of the Tornante remains as fierce as the Apollo. Utilising the same twin-turbocharged, 700bhp, 4.2 litre Audi V8 as previously, expect the Tornante to achieve a 0-60mph time beginning with a ‘3’ and a top speed well in excess of 200mph, like the Apollo. The most significant mechanical change over the Apollo is that the TT40e sequential transmission is to receive paddle-shifters for the new car.

Further details on the Tornante are currently unavailable, but release dates and prices will be added as soon as they are released.