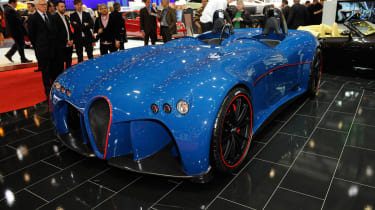 Following from the GTs MF4 and MF5, Wiesmann has launched a new Spyder model at Geneva. Sporting radically unfamiliar styling to the German firm’s previous efforts, it appears to aim itself at the lightweight trackday market in a similar vain to the KTM X-Bow.

Powered by the 4.0-litre V8 from the BMW M3 and weighing just 998kg, performance is predicted to be fairly explosive. Wiesmann has said the 414bhp Spyder should hit 60mph in less than four seconds and a top speed of 180mph. With no windscreen and no doors, testing those performance figures would seem to require a great deal of bravery!

According to Wiesmann, the Spyder is a study derived from the Wiesmann brother’s early designs and comes from customer demands for a more purist, stripped-out model. It is also said to incorporate their ‘many years of experience in sports car construction’, implying the use of advanced materials in building the Spyder.

There has been no word yet on whether the Spyder will make production but, if it does, don’t expect it until 2012 at the very earliest.