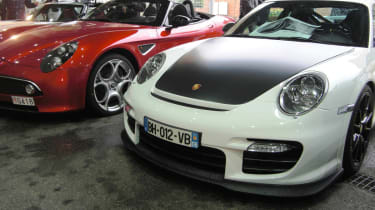 The 2011 Top Marques car show in Monaco is held on April 14 to 17. And lucky visitors will have the opportunity to test drive the Bugatti Veyron-baiting Koenigsegg Agera and the 225mph Noble M600 around the legendary Formula 1 circuit.

A total of 30 cars will be available for test drive at what is billed as 'the world’s only live supercar show'. There will also be the launch of six new supercars from European companies: Gemballa (Germany), Codatronca (Italy), Keating Supercars (UK), Identity Cars (Spain), and Soleil Motors (Italy).

The focus here is firmly on sales. Last year over 200 million euros worth of products were sold, including cars, watches and other high-end goods. If Monaco is the millionaire’s playground then Top Marques is where they buy their toys. This year the organisers hope to reach between 400-500 million euros of sales, with growth primarily fuelled by a delegation of super-rich Chinese visitors tying in with the first Top Marques China taking place in Macau later this year.

With an unofficial slogan of 'see it, drive it, buy it', it is perhaps unsurprising that Top Marques has long been an attractive proposition for low-volume and niche car manufacturers eager to get potential customers behind the wheel of their products. Other cars available to test drive include offerings from Maybach and Marussia and the electric Fisker Karma, one of six 'green' cars in attendance.

It’s not all supercars, though. Canada’s Conquest Cars will be exhibiting its Knight XV, an 'ultra luxurious, fully armoured' SUV (pictured right, black). At the other end of the spectrum Garia will be exhibiting its luxury golf cart, apparently manufactured at the same facility as Porsche Boxsters and Caymans.

If you don’t manage to blag yourself a test drive, the sight and sound of some of the world’s most desirable cars ripping around the streets and tunnels of Monaco is a tempting proposition in itself. And if cars aren’t quite your thing, there’s always Top Marques Watches and Top Marques Superboats running alongside the main event...

We drive the Noble M600 supercar

Exclusive video and pics of the Koenigsegg Agera