Photos of Ferraris, Lamborghinis, a rather special Bugatti Veyron and many more supercars as they all converge in secret in Leicestershire 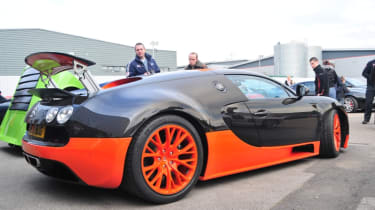 Last weekend 115 cars parked up in the paddock area of Donington Park… but it wasn’t any old collection of metal. The highlights included a Bugatti Veyron Super Sport, an Alfa 8C Spider, an Aston Martin V600 Le Mans, an Aston Martin 2/4 MkIII, the BAC MONO which made its UK debut, a De Tomaso Guara, a Ferrari 275 GTB, a Lamborghini Miura S, a Countach 5000, an open headlight Diablo SV, a Lamborghini Reventon Roadster, a CLK DTM AMG, two Spykers and an LS7 engined TVR Sagaris!

There was also pretty much every Ferrari and Lamborghini since the 1980’s, a range of Porsche RS models, a stunning Jaguar C-Type replica, a Corvette Stingray, an ex-racing Ultima GTR, a Noble M12, a Dodge Viper, a Bentley Supersports, a KTM X-Bow, an Ariel Atom Supercharged and a Lotus 2-Eleven. Not a bad group.

The purpose of the extraordinary private event was not only to bring together Supercars and their owners but also to raise money for a good cause.  The nominated charity was the Bluebell Wood Children's Hospice in Sheffield and £1700 was raised on the day. All in all, the event was judged a huge success and it looks like it won’t be the last…