British Touring Car Championship boasts its most diverse grid yet for the 2011 season. Gallery here 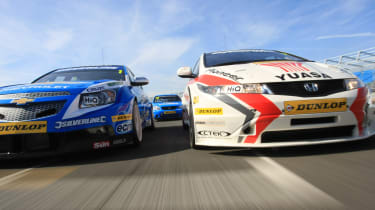 The 2011 Dunlop British Touring Car Championship season kicks off on April 3, and the series is looking healthier than ever. No fewer than 12 different models of car are set to compete, from the all-new Ford Focus to the successful Chevrolet Cruze of 2010, with everything from the Audi A4 to the Toyota Avensis in between.

The evo-backed championship visits the top UK circuits over ten rounds, the decider being held at Silverstone in October.

New for 2011 is the first appearance of NGTC-spec cars. NGTC, or Next Generation Touring Car, is a new set of regulations designed to reduce the design, build and running costs of a Touring Car as well as narrowing performance gaps to ensure closer racing. The spec includes a 300bhp-plus 2-litre turbocharged direct-injection engine and a six-speed Xtrac sequential gearbox, while the body must be 4.4m or more in length and the car must be freely available through UK dealers. That will rule out some of the smaller hatchbacks and hangers-on from a previous era of BTCC, such as the Honda Integra.

NGTC will gradually be phased in to cover the whole grid in a few years’ time. Some of the first cars running the new set-up include the A4 and Avensis.

Much attention will focus on the official manufacturer teams, though, with reigning constructors’ champion Honda running a new NGTC-engined turbocharged Civic, and Chevrolet returning with BTCC crowd-pleaser Jason Plato attempting to defend his drivers’ title in the Cruze.

Advance race-day tickets begin at £23 per adult, with under-12s getting in free. Prices include access to the pitlane and driver autograph sessions. And you can follow the 2011 Dunlop BTCC season, with race reports, picture galleries and more, here on evo.co.uk