Jason Plato tries hard to defend his 2010 title, winning two races to take an early lead in the championship at the Brands Hatch opener 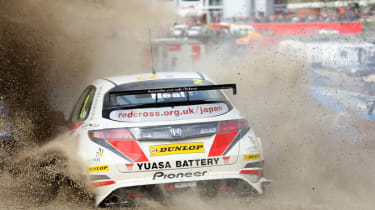 Neal had done extremely well in qualifying, taking pole position and breaking the all-time BTCC qualifying record for Brands Hatch (48.210sec). This was a big relief for the Honda Racing Team, because the 2011 Civic is fitted with a new turbocharged engine, built to the BTCC’s latest Next Generation Touring Car technical regulations. The celebrations were to be short-lived however, when Neal's Civic spun out on lap 1, giving Jason Plato an early advantage in the Chevrolet Cruze.

Plato then went on to win, closely followed by James Nash in the 888 Racing Vauxhall Vectra (2nd) and Tom Chilton's Team Aon Ford Focus (3rd). Moving onto the second race, Plato's Cruze was laden with the 45kgs of 'Maximum Success Ballast', but he still managed to lead throughout the race, taking his second win of the day, comfortably ahead of team-mate Gordon Shedden and Mat Jackson in the Local Airwaves Racing team’s Ford Focus.

The fastest race-lap of the entire day was set by Matt Neal in the Civic during race 2, who was also placed in pole position for race 3. He went on to win the race, closely followed by Mat Jackson and Paul O’Neill in the GoMobileUK.com with tech-speed Chevrolet Cruze.

These two wins were more than just points on the scoreboard for Plato though. Winning 62 times now makes him the most successful BTCC driver of all time, overtaking Andy Rouse's record of 60 wins. Plato said: 'Given the gap to Matt in qualifying I didn’t expect to be leading this early, but the chances came our way and we capitalised. Beating Andy Rouse’s record is also a lovely bonus – he’s one of the legendary names who I used to watch as a kid and it’s actually hard to believe that 14 years have passed since I got my first win when I first came into the BTCC in 1997!'

Plato (38) now leads the Drivers' Championship with an eight-point lead over Jackson (30). James Nash trails behind in third (26), closely followed by Gordon Shedden (25) and Matt Neil (23). The next race will be held at the Donington GP circuit on 17 April. For more detailed race results and championship standings, visit www.btcc.net.