The turbos show their strength at Donington and Jason Plato recovers some points after a huge crash. Report and gallery here 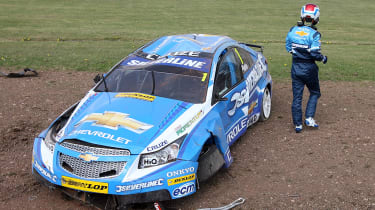 Matt Neal once again took pole position in his turbocharged Team Honda Racing Civic, but unlike Round 1, he kept the Honda on track going into the first corner. He took the first win of the day, also setting a new Donington lap record, closely followed by Andrew Jordan in the Pirtek Racing Vauxhall Vectra and James Nash in the 888 Racing with Collins Contractors Vectra who were both strong throughout the day.

Race 2 once again demonstrated the considerable advantage of turbocharged cars at the long and fast Donington GP circuit, with the two Vectras of Jordan and Nash taking first and second, shortly followed by Matt Neal in the Civic. Jason Plato had a massive crash, which ended his race early.

The Airwaves Racing Ford Focus of Mat Jackson took the win in Race 3, narrowly avoiding a crash, followed by Andrew Jordan, then James Nash, making this his third consecutive podium position of this race. Jason Plato took and emotional sixth after his crash in the previous race.

Plato, Championship leader going into this round, had a very unlucky start. He struggled to any points in Race 1, finishing 18th. Race 2 saw the two-time champion leaving the track at 120mph, hitting the barrier and rolling his Silverline Chevrolet Cruze three times. Luckily he wasn’t injured, but the crash left his Cruze almost completely destroyed. His team of mechanics worked non-stop to repair the damaged Chevrolet, virtually rebuilding the whole car in a little less than 90 minutes.

Reduced to tears at the dedication of the RML crew, Plato said: ‘It was amazing. It looked an impossible task and the car looked like a Transformer. But the lads were just amazing – you could see the passion in everybody.

‘They’re the best racing team in the world, forget F1. That was teamwork. I had tears in my eyes, they had tears in their eyes and to see their commitment makes up for all the bad weekends we’ll ever have. There was real emotion out there today.’

James Nash, yet to win a race this season, is the current championship leader due to consistently placing near the top of the field in every race. He commented: ‘It feels unreal to be leading. Last year we really struggled but have transformed the car this year with the new turbo engine. I’m actually now starting to get disappointed by just being on the podium – I really want that first win!’

Nash (59) now leads the Drivers' Championship with a four-point lead over two-time champion Matt Neal (55). Mat Jackson (54) trails by one point, and Andrew Jordan (45) is almost ten points behind. The next race will be held at Thruxton on 1 May. For more detailed race results and championship standings, visit www.btcc.net.