The UK has a new racing circuit. Blyton Park opens near Gainsborough in Lincolnshire 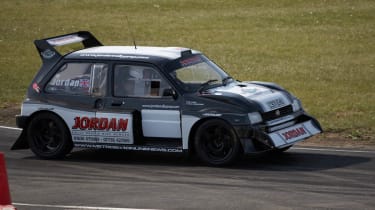 Blyton Park, Britain’s newest circuit, went live on May 4 with a launch that saw a fantastic range of cars lap the pristine new 1.5-miles of asphalt. The venue is the culmination of eight years of effort by Richard Usher, an entrepreneur and enthusiast who has so far invested about half a million pounds rejuvenating the facility near Gainsborough in Lincolnshire.  The new track was designed by ex-touring car ace Eugene O’Brian and evo’s own John Barker. ‘Richard sent me a set of plans for the place last year and asked me to draw a circuit to make the most of it. I didn’t know he’d asked Eugene to do the same. The spooky thing is, we came up with virtually the same circuit,’ said Barker.  There has been motorsport at the former Second World War US bomber for around 50 years and the local Grass Track racing club still occupies a part of the site, but Usher has no ambition to see circuit racing at Blyton. ‘The UK already has enough race tracks. I hope the wide range of vehicles that we saw here today will reflect the range of vehicles we attract to Blyton.’  Among the cars to christen the anti-clockwise was a fine selection of historic rally cars, including original Escorts, Mick Strafford’s unique Chevy-powered Firenza and Steve Perez’s lurid and loud Lancia Stratos. Phil Morrison of Driftworks explored the outer reaches of the asphalt in his Nissan Silvia S15, while Callum Macleod wowed the crowd when he demonstrated David Harrison’s DFV-powered Larousse Lola SC88. Barker’s near-mythical Capri V8 even made a few rapid tours.  Blyton will continue to host Rallycross and Supermoto meetings and it’s hoped that the track will be sanctioned for Sprints but Usher hopes the venue will become a destination for all sorts of enthusiasts: ‘I built the track so that people could come here and enjoy their cars, a pastime that’s increasingly difficult on our roads,’ he said.  The track is now open for bookings for track days and general testing as well as location video and photography. Call 01629 650764 or visit the website here