evo was at the 2011 Cholmondeley Pageant of Power launch day. Here's some of the legendary supercars and racing cars present 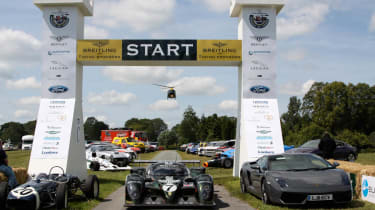 The peaceful grounds of Cholmondeley Castle in Cheshire will once again reverberate to the sound of classic and contemporary exotics from 15-17 July at the 2011 Cholmondeley Pageant of Power.  Highlights will be the Lotus 18 that Sir Stirling Moss drove to victory in the 1961 Monaco Grand Prix, Jackie Stewart’s 1971 Championship winning Tyrrell, the spectacular Lindner Nocker low drag Jaguar E-type fresh from an exhaustive restoration and a collection of mega capacity pre-war specials including the monstrous 47-litre BMW aero-engined Brutus on loan from the Sinsheim Museum in Germany. Modern elements will include the ice land-speed record Bentley Continental Supersports, the Bentley Speed 8 that won the Le Mans 24 hours in 2003, and a supercar collection including the new BAC Mono, McLaren MP4-12C, Ariel Atom V8, Noble M600 and Jaguar XKR-S. WRC fans will be well served, with a Martini-liveried Lancia Delta Integrale, a Ford RS200 and Audi Quattro all set to bellow around Cholmondeley’s newly built three-quarter-mile tarmac rally stage. Rare and iconic cars from the Wheatcroft Donington Collection will also feature including the priceless Auto Union and the full collection of Vanwalls - Streamliner, Thinwall and Tear Drop - and the only four-wheel drive F1 collection in the world. Cholmondeley will also showcase some of the latest ‘green’ cars with Nissan’s prototype electric racecar - the Leaf NISMO - along with Volkswagen BlueMotion products, Honda hybrid rally cars, the Jaguar XF diesel, electric Range Rover Liberty and the Tesla roadster. To top it all off, there’ll be helicopters, planes and boats as well as dramatic military displays and plenty of two and three wheel racing bikes.