A selection of pictures from the Goodwood of the North, the 2011 Cholmondeley Pageant of Power 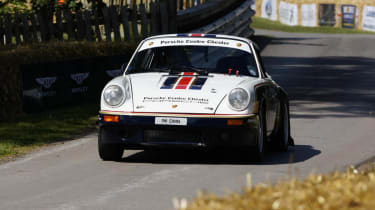 The 2011 Cholmondeley Pageant of Power takes place this weekend. Based in Cheshire, it’s dubbed the Goodwood of the North.

Much like Goodwood, the event boasts a vast array of performance and racing cars and bikes, classic and modern, while helicopters, aerobatics, military combat displays, powerboats and hovercrafts also appear. If you’re similar to us, and like just about anything with an engine, you’re in luck.

Modern elements will include the ice land-speed record Bentley Continental Supersports, the Bentley Speed 8 that won the Le Mans 24 hours in 2003, and a supercar collection including the new BAC Mono, McLaren MP4-12C, Ariel Atom V8, Noble M600 and Jaguar XKR-S.

WRC fans will be well served, with a Martini-liveried Lancia Delta Integrale, a Ford RS200 and Audi Quattro all set to bellow around Cholmondeley’s newly built three-quarter-mile tarmac rally stage.

You can see some pictures from the first day of the Pageant below, click to enlarge. And if you’re attending, why not share your pictures or reports with the evo Community?