Bristol Cars is set to launch a new 200mph, '100mpg' electric supercar in 2013 in conjunction with new owners Frazer-Nash 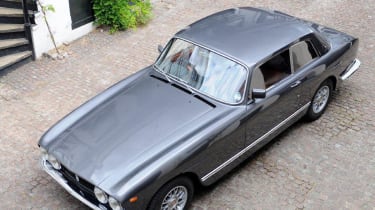 evo has learned that Bristol Cars is working on an all-new four-wheel drive ‘range extended’ electric supercar, scheduled to be launched in 2013.

The British sportscar maker was bought by Kamkorp Autocraft, part of the Frazer-Nash Group earlier this year. And, after twenty years of dedicated research into electric propulsion, Frazer-Nash are now leaders in plug-in ‘extended range’ powertrains.

Kamkorp owner Kamal Siddiqi bought Bristol as a way to showcase Frazer Nash’s electric technology, and he immediately tasked his team with the creation of a new Bristol capable of both 200mph and the equivalent of 100mpg, while sitting four people in ‘absolute comfort.’

Rather than develop the car from scratch, Siddiqi is in final negotiations with an undisclosed car manufacture to use their car as the base vehicle for the project, with the plug-in powertrain and its engine-driven generator then installed. Like Fisker, manufacturers of the recently launched Karma, Frazer-Nash believes that a ‘pure’ electric car wouldn’t work because of customer resistance to the limited range. You can see more details of the how the system works on the company’s website.

The new car will feature separate twin motor electric powetrains front and rear, effectively making the car four wheel drive, plus a 14kW/h battery pack that can be charged either from the mains, brake regeneration or by an onboard generator powered by a Wankel motor running at 3500rpm.

The big question is if it will all happen? It may sound far fetched, but having driven two Frazer Nash prototypes, I’m impressed by their technological lead over other electric range extender cars in the market. Frazer-Nash quotes 97% driveline efficiency for their electric powertrain thanks to the combination of very efficient motors powering individual wheels, cutting out the need for a conventional gearbox or differential (as required by the Chevrolet Volt and Fisker Karma.) That compares to a loss of up to 15 percent through a conventional gearbox, with a conventional differential losing another 5 to 10 percent.

Frazer-Nash is partnering Proton on the development of its electric drivetrain, and it entered a Proton Exora REEV development vehicle in this year’s Brighton-London Future Car Challenge, which won it’s class by achieving the equivalent of 127mpg – so they’ve proved it can be done.

We’ll bring you more news when we hear it but, in the mean time, have a guess as to what the donor car is going to be. The only clues to go on are Kamal Siddiqi’s favourite Bristol is the elegant Bristol 411 and the donor car has a very sophisticated suspension system. Over to you..