A new layout at Snetterton provided an action-packed weekend of BTCC racing, with yet another championship leader emerging. Report and gallery here. 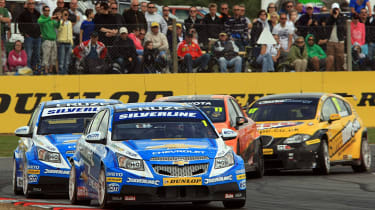 Returning from the month-long summer break, the second half of the BTCC season is really starting to heat up. After a full-on weekend of racing at the new Snetterton 300 circuit, the top-four championship leaders finished closer than ever. Mat Jackson now leads the championship, after sharing wins with Gordon Shedden and Jason Plato, who collected a useful amount of points to close up the championship, but the pressure was on for the for the turbocharged cars, after a lower boost restriction was put in place.

Plato took the first win of the day after securing pole position in his Silverline Chevrolet Cruze, closely followed by team mate Alex MacDowall in second - the team's first one-two finish of the season. There was a big first-corner incident when Matt Neal tried to squeeze past Plato on the first lap. The pair touched, and the Honda Civic was sent into a huge spin. Neal managed to make a recovery but finished outside of the points, but his team mate Gordon Shedden took third. Following an investigation into the incident, race stewards decided Jason Plato was responsible for the incident, giving him a three-point endorsement and a fine of £500.

Race 2 saw Sheddon take the top step of the podium, after seizing his opportunity going into the second corner, passing Plato and leading the rest of the race. The two Silverline Cruzes finished in third and fourth, after having a very tough time passing the Toyota Avensis of Frank Wrathall, which showed impressive race pace.

The final race of the day was dominated by Mat Jackson in the Airwaves Racing Ford Focus, ahead of the two Chevrolet Cruzes of Paul O'Neill and Jason Plato. Matt Neal, had a storming race, starting in 17th, driving the wheels off his Civic to finish in fourth, and pick up a few points.

Reigning Champion Plato was very happy with his result, and said: 'To have arrived here 40 points behind Matt and to be leaving just ten behind him is mission accomplished for us today. We took some big risks in qualifying to get the pole – we had to – and it’s paid off really well.'

Jason Plato (138) was arguably the weekend's biggest winner, taking a podium position in all three races, but Mat Jackson (158) is now sat at the top of the championship leader board for the first time in his career, after an equally impressive race win. Sheddon (150) remains close on his tail, with Matt Neal (138) slipping back to third. Round 7 will be held at Knockhill on 04 September. For more detailed race results and championship standings, visit www.btcc.net.