The Sultan of Brunei's famous supercar collection up for sale. Picture gallery of its stars here 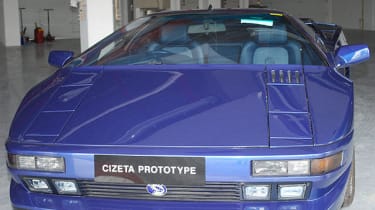 It is pretty common knowledge that the Sultan of Brunei has a large car collection. Many of the vehicles have never been driven and remain unregistered with delivery mileage.            James List has been trusted with the disposal of a number of these cars. Among the Ferraris and Lamborghinis up for sale are some less common beasts, including some one-off and prototype cars.            The list contains at least 25 Ferraris, with highlights including a 348 Competizione, a delivery mileage F40 and a Testarossa Spider. Two lightweight Porsche 993 Turbos and a number of Lamborghinis also feature.            Perhaps of more interest are the ItalDesign BMW Nazca and a Cizeta V16, which also feature in the list. The BMW is one of only three ever produced, and has a reported top speed of 203mph courtesy of its 5.7-litre Alpina-derived engine. The Cizeta features a unique V16 engine and boasts a top speed of 204mph. The good news for interested UK parties is that both are right hand drive.  While the site does not disclose the owner of the vehicles, currently stored in Singapore, it is commonly known that they are part of the Sultan’s collection.