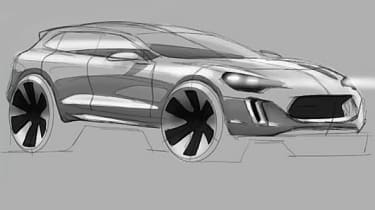 A brand new British car company has been announced, and rather out of the blue. Eterniti Motors will debut at next month’s Frankfurt motor show. A short post on the company’s website – ‘A different kind of luxury car brand. A luxury car brand from London. Eterniti Motors’ – doesn’t really help describe what is going on. Although the press release claims the company is from London, reports suggest that the main investor in the brand is a ‘luxury motorcar’ investment group and racing team named Gruppem Investments from China. An early sketch which was also released appears to show the manufacturer’s debut car – a Crossover SUV which will borrow its chassis and engine from an as yet unknown manufacturer. Although the exact details on the donor engines being used are yet to be announced, it has been confirmed that the cars the will be ‘high performance’. Although the sketch appears to show what looks like a rival for the BMW X3 and Audi Q5, the car will apparently be aimed at buyers of the reborn Aston Martin Lagonda and the recently announced Bentley SUV, and will beat its two rivals to the market. Eterniti uploaded a short teaser video to its website which suggests that its new SUV will be named the ‘Hemera’, and it looks likely to have a price tag of around £150,000. A company representative revealed to evo ‘the car in the sketch is an indication of the first car, which will create a new niche above the most luxurious SUVs currently available, and will offer handmade interiors with any level of bespoke interior trim a customer requires, as will all future Eterniti products.’ ‘We're calling the first vehicle a Super-SUV, and it will be the first car in the space which Bentley and Lagonda are talking about going after, which will have appeal in major economic hot-spots from London to the emerging Asian markets. The company is backed by an international group of investors.’ ‘We're based in London and the team has experience of retailing luxury and high-performance car brands, motor sport, vehicle engineering and components development and production’. A bespoke supercar is also planned, and will be designed in-house rather than borrowing parts from other manufacturers. Expect more details on the team involved with the project and the car itself in the weeks leading up to the Frankfurt show, which opens on September 13.