The Honda Racing team has solidified its championship lead at Knockhill, but the season is far from over. Report and gallery here. 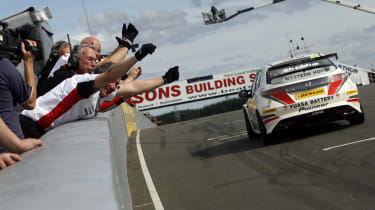 As ever, drama and controversy dominated another action packed weekend of BTCC action, this time at Knockhill in Scotland.

Team Airwaves driver Mat Jackson went into the weekend as series leader and managed to qualify in seventh place for the first race despite a full ballast quota of 45kg. Team Aon’s Tom Chilton secured pole, the first for the new ‘Global’ Ford Focus. Chilton was also the only man to go under 53 seconds in qualifying. Perhaps the most interesting result of qualifying, however, was the NGTC (Next Generation Touring Car) lockout of the second row. Frank Wrathall secured third position in his Toyota Avensis and Rob Austin lined up fourth in his rear wheel-drive Audi A4, indicating that the new cars are becoming more competitive.

Chilton converted his first-place grid position to a race win in round 19, an indication that the Aon Focus has received some significant revisions over the summer break.

This meant the Reigate-based driver was saddled with the 45kg of ballast for race two, which eventually took its toll. Chilton was passed by the Honda Civics of Matt Neal and Gordon Shedden following a safety car period. Neal was then overtaken by his team mate following a mistake at the chicane. Race 2 finished with Shedden as the victor, followed home by Matt Neal, Frank Wrathall and Tom Chilton.

The first seven from the result of Round 20 were reversed for the starting line-up of Round 21. This put Jason Plato on pole in his S2000 Chevrolet Cruze, who battled with Tom Boardman’s Seat Leon in the opening laps. However, contact between the two at Leslie’s corner put the current champion out of the race. Boardman went on to win the race from Rob Collard in second and Frank Wrathall again in third.

Former championship leader Mat Jackson had a torrid weekend with no points scored. He now finds himself in third position behind the Honda duo of Neal and Shedden. The Scotsman leads Neal by just one point, with Jackson now twenty-two points further behind. Jackson also finds himself in possession of a narrow five point lead in the Independents’ Championship over James Nash in the Vauxhall Vectra.

The championship continues at Rockingham on 17th/18th September.