Honda's championship lead has been cut down, as Jason Plato closes the gap to just 24 points. Report and gallery here. 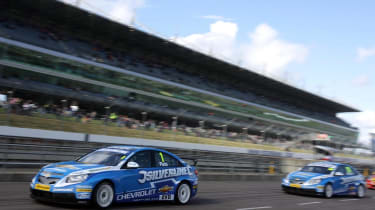 Entering the closing stages of the BTCC, a fantastic race weekend at Rockingham saw reigning champion Jason Plato draw ever closer to the championship-leading Hondas of Matt Neal and Gordon Shedden. After taking the first win of the day, as well as two high-points paying positions, Plato has certainly strengthened his position in the championship. Shedden took the second win of the day, with James Nash picking up win number three, the first win of his BTCC career.

Starting from pole-position, Jason Plato blitzed the competition in race one, his Silverline Chevrolet Cruze leading throughout the race to take his sixth win of the season. Plato was closely followed by Paul O’Neill in the GoMobileUK.com Chevrolet Cruze and Frank Wrathall in his Dynojet Toyota Avensis, which has become increasingly fast in the last few races.

Race two offered Gordon Shedden the chance he needed to make up some points, and he immediately took the offensive. Starting in sixth place, he soon made his way up to second, overtaking Jason Plato for the lead. It was then a tussle between Plato and Frank Wrathall, but the NGTC Avensis proved too fast for Plato who had the maximum ballast penalty onboard after his win. Plato then also fell prey to a quick Matt Neal, who took third position, leaving the current champion in fourth.

After the race, Plato commented: 'We’ve probably got more out of the day than we anticipated which is extremely pleasing. But although I think we can be strong again at Brands Hatch I still don’t see how we’ll be able to match the turbocharged cars at Silverstone. We’ll of course give it everything but it’s really for the Honda drivers to lose now.'

Both Hondas scored well, which means the drivers are now in joint first position in the championship, with 204 points. Just 24 ahead of Plato, who is doing everything he can to defend his title. The next race, and penultimate round of the BTCC, will be held at Brands Hatch on 2 October. For more detailed race results and championship standings, visit www.btcc.net.