Legendary car designer Gordon Murray has created another sportscar, although the bad news is that there are no plans to put the intriguingly named Toray TEEWAVE AR.1 into production. 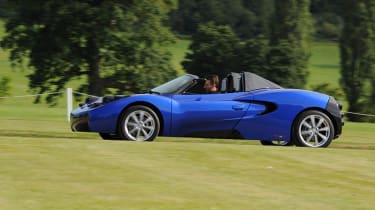 Legendary car designer Gordon Murray has created another sportscar, although the bad news is that there are no plans to put the intriguingly named Toray TEEWAVE AR.1 into production.

As with Murray’s other recent projects, the AR.1 is electrically powered, and is intended to demonstrate the rapid-cure carbonfibre technology of the company that commissioned it, Toray.

The powertrain is taken from the all-electric Mitsubishi iMIEV and uses a 62bhp electric motor that’s claimed to deliver a 0-62mph time of 11.6 seconds and a top speed of 91mph. The total car, including battery pack, weighs 850kg – 400kg less than the Tesla Roadster.

The two-seater was designed and built in just nine months, although sadly there are no plans to turn it into a production version. As with Gordon Murray Design’s other recent models, it’s a showcase for the company’s design and engineering talents.