We look ahead to the closing weekend of the 2011 BTCC Touring Car season. Five drivers could win the title! 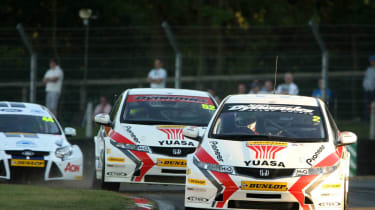 The BTCC British Touring Car Championship reaches its finale at Silverstone this weekend after a memorable season stretching 10 meetings and 30 races. Remarkably, five drivers are now candidates for winning the title - the first time this has ever happened in the history of the sport. Just 44 points separate the top five, and only five divide the top three. Silverstone promises to be epic. Up for contention this year are Matt Neal (Honda/Team Dynamics), teammate Gordon Shedden (Honda/Team Dynamics), defending champion Jason Plato (Chevrolet/RML) and wild cards Mat Jackson (Airwaves Racing) and James Nash (888 Racing). Each are technically able to win this weekend, although the real contenders remain Neal, Shedden and Plato. With Plato’s car lacking a turbo compared to his other competitors (most of the competition are turbocharged, unlike Jason’s Chevrolet Cruze), it may seem unlikely for him to win at Silverstone, on a track that favours speed over cornering ability. Despite this, Plato’s experience and track record mean he can’t be discounted.  Two-time champion Neal remains the favourite, being five points ahead of both Plato and Shedden. Neal and his teammate have, however, had the boost on their turbo reduced and had weight added to their cars in order to keep their performance on par with other competitors. Fellow Honda/Team Dynamics driver Gordon Shedden is also looking for a Silverstone win after performing well throughout the last two seasons. Although having never won the championship (both Neal and Plato have won it twice), Shedden has driven consistently throughout 2011, and is arguably no longer considered a secondary driver within the Honda team.  Both Jackson and Nash seem outsiders for the championship, but could take the title providing they win all three races. Jackson looks especially good for an outside bet having previously led the drivers’ standings before an abysmal meeting at Knockhill. James Nash looks the least likely to take the championship, having only made his debut win this season. Silverstone’s trio of races therefore promise to be something special, and with tensions running high throughout, expect more crashes and more overtakes than ever before. BTCC may have lost some of the thrills it provided in the 1980s and 90s, but this weekend promises to come pretty close.