After a strong effort from the Honda Civics, Championship standings have closed right up after a weekend of extremely close racing at Donington Park. 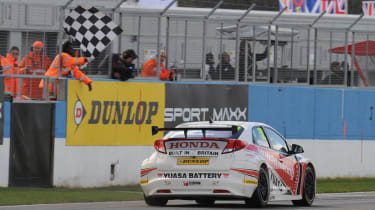 The three rounds of extremely close racing at the Donington Park GP circuit were mostly dominated by the Honda Civic of Gordon Shedden who won two of the three races, coming second in the other after Mat Jackson stole a the win in race 1. Despite these mighty performances, Jason Plato is still hanging in at the top of the championship standings after scoring some steady points throughout the day.

In race two, Shedden led team mate Mat Neal in the first of his two wins, again with Mat Jackson hot on their tails. Jason Plato's MG looked fast, but after a crash with Robert Collard in the BMW 3-series, he failed to score any points.

The third race of the day was not without controversy. Mat Jackson crossed the finish line first, but was later disqualified from the race due to running higher-than-permitted turbo boost levels. Plato also crossed the line ahead of Shedden, but was knocked back a place by stewards after they deemed his move on the final corner 'unfair', giving Shedden the third win of the day.

The next round of this year's BTCC, will be held at Thruxton on 29 April. For more detailed race results and championship standings, visit www.btcc.net.