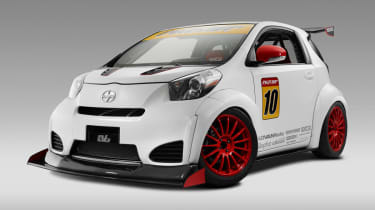 Here one that might get the automotive taste police involved – three Toyota iQs have been created for the ‘Tuner Challenge’ at this year’s SEMA show in Las Vegas.

SEMA is the US’s biggest tuner show and ‘tasteful’ is rarely a word that would be applied to any of the exhibits there. So it’s unsurprising that all three of the tweaked iQs have been blinged to within an inch of their lives.

The best looking is definitely the iQ-RS, created by Michael Chang, which gives the babiest Toyota (wearing the Scion badges it carries in the ‘States) a full motorsport look. It gets a carbonfibre body kit, lowered suspension, Sparco buckets and Advan race alloys.

The iQ RX is the work of Veilside, and features – according to the blurb – ‘subtle matt metallic grey and bronze pearl paint finish’ along with a nitrous oxide injection kit to give the 1.3-litre engine some more urge.

Finally, the iQ-MR by Tatsu has transformed the iQ into a mid-engined mini-monster – more Godzuki than Godzilla – with the motor driving the rear wheels and a custom body kit.

Sadly there are no pictures of the most intriguing-sounding iQ at the show, the ‘Put Boss Cartel’, which has had its roof cut off and its doors cut down to work as a ‘racing pits support vehicle.’

SEMA opens in Las Vegas on the 1st November.