It's the F&M Mugello. An unfamliar name for a familiar Italian supercar recipe... 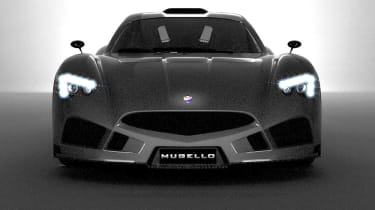 It’s a new Italian supercar! But not one you’re going to be familiar with. Meet – in teaser form at least – the F&M Mugello. A trio of murkily lit shots is all that's been revealed so far, and we’ve lightened them to yield a bit more detail, such as the tricolore band behind the front wheel arches, a set of yellow brake calipers and striking exhaust exits at the rear. Information prior to its January 2012 release is scant. In the words of F&M, ‘Mugello is a lightweight and powerful sports car, strongly connected to racecars from where it inherits the power and the perfect dynamic behavior. But it also distinguishes itself with the chiseled styling and the attention to fine details.’ It’s mid-engined and will be put together in Pontedera, near Pisa. Just five a year will be built, making it rarer than anything rolling out of Ferrari and Lamborghini’s factory gates. It’s been designed by Luca Mazzanti and Zsolt Tarnok, and there’s hints its styling will influence the design of more F&M sports cars. We look forward to finding out more next month.