GM back on top 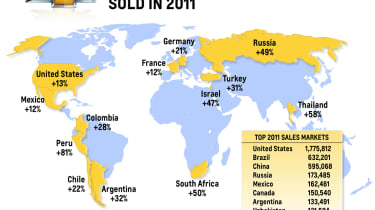 The biggest driver for this victory has been Chevrolet's worldwide sales-effort, accounting for 4.76 million of GM's result, with some big increases in sales in both emerging and developed markets. 15 countries have the biggest year-on-year increase ever, including Peru (81 percent), Vietnam (79 percent), Thailand (57 percent), South Africa (50 percent) and Israel (46 percent).

Chevrolet's biggest seller was the Cruze, with over 670,000 sold internationally in 2011 alone. GM Chairman and CEO Dan Akerson was incredibly happy about the result, and said: 'Chevrolet's impressive growth in both established and developing markets is the result of a strong new product lineup that meets the diverse needs of consumers around the world. In addition to Chevrolet's record-setting sales, the entire lineup of GM vehicles is meeting customer needs for fuel-efficient cars and work vehicles as well as unmatched luxury.'