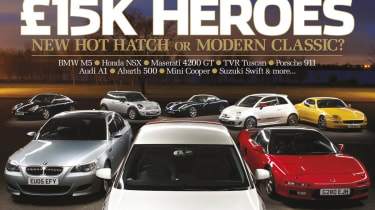 Buy a copy of evo 167 in our online shop

NewsAll the big news from the Detroit show, plus first pics of the all-new Porsche Boxster

Tiff Needell - NEW!TV star and racing driver Tiff's first column for evo takes a look at his supercar highlights (and lowlights...) during 2011

£15K heroesWith just 15 bags of sand, you can choose from some seriously good performance cars. We kick off with our supermini supertest, as the new Suzuki Swift Sport tackles rivals from Renaultsport, Audi, Abarth, Mini, Ford and SEAT. £15K needn’t mean three doors and a hundred-odd horsepower, though – it could also buy you some truly iconic metal. David Vivian then tries some used exotics from BMW, Maserati, TVR, Porsche and Honda, and there’s a detailed look at the running costs too

Lamborghini super trofeo to monzaIt’s another special-edition Gallardo, but the Super Trofeo Stradale is the meanest yet. Roger Green takes this new road-racer to Monza’s rarely seen old banking

Supercabrios on the TTJaguar and Mercedes starred in a great motorsport battle on the 1955 RAC Tourist Trophy. We recreate it with the new XKR-S Convertible and SLS Roadster

The 3000bhp VauxhallJonny Smith gets an exclusive ride in Red Victor 3, the dragster with a UK tax disc

evo KnowledgeIt might split opinion, but there’s no denying Porsche’s Cayenne is capable. And, as our buying guide reveals, good value, too

Track battleIt’s a war of the Spyders, as drop-top Audi R8 takes on welterweight Porsche Boxster in one of our hardest-to-call track duels yet

Me and my carsJuha Kankkunen and his numerous supercars and rally icons. Lucky bugger

Buy a copy of evo 167 in our online shop