The biggest gathering of Silver Arrow Grand Prix cars ever seen, will race at this year's Goodwood Revival 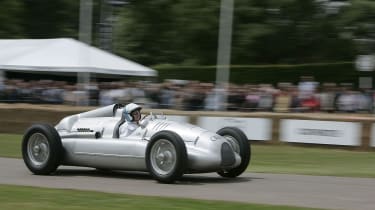 75 years since the first German racing cars turned up at the British GP held at Donington, more than ten Auto Union and Mercedes-Benz Grand Prix cars, nicknamed 'Silver Arrows', will be driven at racing speeds with a line-up of top drivers, at the Goodwood Revival (14-16 September) in the biggest display of running Silver Arrows in the world, ever. They will be running along side contemporary rivals from the UK, Italy and France.

During the 1937 season, when the German Silver Arrows first came to the UK, both Auto Union and Mercedes-Benz were running in excess of 600bhp, more than twice the amount their rivals. The racers were built to destroy the competition, mostly funded by the German Government.

This will be the first time so many Silver Arrows have run along side rivals since the Yugoslav Grand Prix on 3 September 1939 - the final race before World War II broke out.