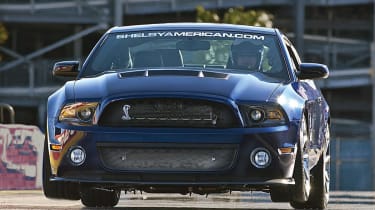 Shelby has revealed a special edition Mustang 1000, due to make its debut at the New York motorshow in April.

Shelby-tuned Mustangs have always been for those who prefer brawn over sophistication, and the latest offering is set to raise the performance bar even further. Producing a claimed 937bhp in road-legal form, and 1085bhp in the even wilder track-orientated S/C version - the Shelby 1000 promises to be quite a monster. Extra power comes from a fully rebuilt version of the Ford 5.4-litre V8, with a hefty supercharger and ‘a little Shelby magic’.