The 2012 British Touring Car Championship kicks off at Brands Hatch. Who's looking good so far? 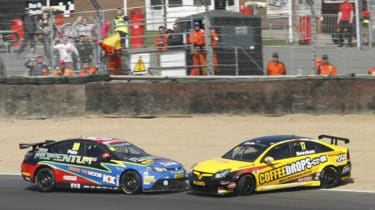 It was a great opening weekend to the new British Touring Car Championship season as Robert Collard, Matt Neal and Jason Plato shared the spoils at the Brands Hatch Indy circuit. A race win for each of the drivers puts them near the head of driver standings for the race at Donington Park in a fortnight’s time. Plato completed a good maiden outing for the MG6 in the BTCC with two podium finishes in races two and three, backed up by a fourth place in race one. The gradual improvement of the MG6 throughout the day came as the BMWs fell off the pace, though Collard was consistent enough in his BMW 320si to be in the hunt after the closing race. Andrew Jordan had a quietly successful day in his Pirtek Racing Honda Civic, finishing the day with two second-places and a sixth-place, putting him third in the post-race standings. Neal continued the success of the Civics in his manufacturer’s car with two podium finishes in the day’s first two races. Dave Newsham had qualified on pole for the opening race in a career-first, but crashed out of the race following a tussle with Plato’s MG6. Newsham and his Vauxhall Vectra did finish the day with a maiden podium result in race 3, easing the pain of the early disappointment. Attention turns now to round two at Donington Park, where the leading drivers will hope to build on good starts to the season with strong performances at the Leicestershire circuit. ResultsRace 11 Robert Collard  BMW 320si2 Matt Neal  Honda Civic3 Tom Onslow-Cole BMW 320si Race 21 Matt Neal  Honda Civic2 Andrew Jordan Honda Civic3 Jason Plato  MG6 Race 31 Jason Plato  MG62 Andrew Jordan Honda Civic3 David Newsham Vauxhall Vectra Drivers’ Standings after Brands Hatch (round 1)1 Jason Plato  52 points2 Matt Neal  483 Andrew Jordan 454 Robert Collard  435 Rob Austin  30