A US motor show wouldn't be the same without a selection of big powerful saloons. Here's a gallery of our favourites 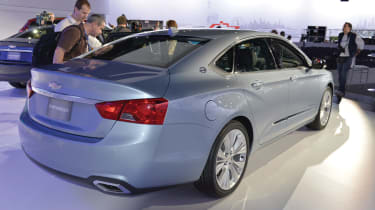 A number of large American-market saloons have been unveiled at the New York motor show, and perhaps one of the most striking is the Chevrolet Impala. The large front wheel drive saloon is powered by a choice of four and six-cylinder petrol engines, and will go on-sale in the USA early next year.

Interesting concept cars include the Acura RLX concept, which is Honda's big attempt at reclaiming some of its lost market share in the US, and the Fisker Atlantic, which has been confirmed as Fisker's first truely affordable range-extender - which is going into production within the next two years.