A day of torrential rain mixed up the pack at this traditionally high-speed circuit, with MG's Jason Plato finishing the day at the top of the championship standings 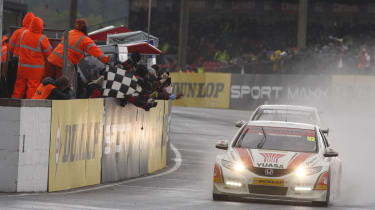 Going into the first race, Andrew Jordan was on pole position, and looked strong - but his Pirtek Racing Vauxhall Vectra got tangled up with the MG6 of Jason Plato going into the first corner, prematurely ending his race. Mat Jackson took the opportunity, and held the lead to the very end of the race, closely followed by Dave Newsham in second place - the best position of his career. Plato scooped up third place, maintaining his championship lead.

The second race saw the Honda Civic of championship hopeful Gordon Shedden storm to the head of the pack, pretty much in a league of his own. Plato managed to pass previous race winner Mat Jackson to take second place.

Race three was a continuation of race two, as the Honda Civics of Shedden and Neal took a one-two finish, with Frank Wrathall in the Toyota Avensis, trailing in third. Finishing the race in fourth place did mean that the Jason Plato has managed to cling onto his championship lead by four points.

The next round of this year's BTCC, will be held at Oulton Park on 10 June. For more detailed race results and championship standings, visit www.btcc.net.