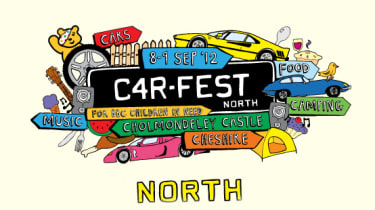 Radio 2 DJ Chris Evans has announced his own charity car event, with at least a third of the price of each ticket benefitting BBC Children In Need. There’s be Carfest events in both the North and the South of England. Carfest South will take place in August 2012 at Laverstoke Park Farm - owned by ex-F1 driver Jody Scheckter - and the event in the North will take place in September 2012 at Cholmondeley Castle in Cheshire, a venue already made famous by the Pageant of Power. The main attraction at both events will undoubtedly be the hillclimb. The extensive list of cars set to attend the South event – headed by Chris’ ‘Magnificent 7’ Ferrari collection –includes various supercars, Group B rally machines and historic F1 cars, as well as the fastest ice cream van in the world – a 90s Ford Transit van with the twin-turbo V6 and running gear from a Jaguar XJ220! There will also be a demo run of the current Marussia Formula One car. Details for Carfest North are yet to be announced but expect a similarly impressive lineup of cars. Carfest will also boast classic car auctions, live music, aerial displays and food stalls. Tickets for both events have very quickly sold out, but you can expect coverage of both on evo.co.uk. Carfest South runs on August 25 to 26 while Carfest North takes place on September 8 to 9.