It's a great weekend for Honda at Oulton Park, with a trio of race wins and a championship one-two 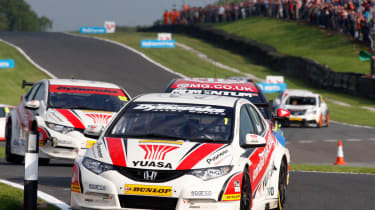 Gordon Shedden left Oulton Park as championship leader as he and Honda teammate Matt Neal won all three races around the Cheshire circuit. Shedden’s victory in the second race was sandwiched by wins for reigning champion Matt Neal.  Jason Plato – the championship leader coming into Oulton Park - had a mixed weekend. He secured pole position in qualifying, but a broken suspension component on his MG6 meant he didn’t start the race. Neal took full advantage, overtaking a fast starting Rob Collard, who had qualified a credible third in the eBay motors BMW 320si, and holding off a charging Andrew Jordan in the final stages to win.  Shedden finished fourth to take the championship lead and won the second race, capitalising on a coming together between Collard and Mat Jackson, an act resulting in punctures and two penalty points for both drivers. Andrew Jordan finished behind the leader for the second race running ahead of Plato, who charged though from the back of the grid to finish third.  In the final race of the day Neal, who finished fifth in race two, held off Plato and pole-sitter Tom Onslow-Cole to win for the second time. Shedden finished fourth to lead the championship, five points ahead of his teammate.

The next round of this year's BTCC, will be held at Croft on 24 June. For more detailed race results and championship standings, visit www.btcc.net.