Report from the 2012 24 Hours of Le Mans race, with success for Audi's hybrid e-trons and despair for Nissan's DeltaWing 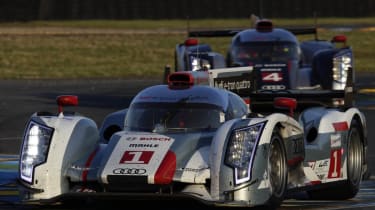 Audi secured a one-two-three finish in the 2012 Le Mans 24 hours, making history with the first ever race victory by a hybrid-powered car.  Andrew Lotterer, Benoit Treluyer and Marcel Fassler took their second consecutive win of the world famous endurance race in the #1 Audi R18 e-tron quattro.  The #2 Audi e-tron of veterans Tom Kristensen, Allan McNish and Dindo Capello had led the race into the 22nd hour, until McNish crashed at the Porsche Curves, causing substantial damage to the front of the car.   McNish managed to limp back to the pits, however, and a superb effort by the Audi team saw them repair it and get it back out on track in just ten minutes.  The accident gave the #1 car the lead and ultimately the victory, with the #2 car having to settle for second ahead of the #4 diesel-powered R18 TDI of Mike Rockenfeller, Oliver Jarvis and Marco Bonanomi. Toyota’s attempts to conquer the Audis in their TS030 Hybrids came to a disappointing end as both cars failed to make the finish. First to go in dramatic fashion was the #8 car in the hands of Anthony Davidson, contact with a LMGTE AM class Ferrari sending the Toyota flying through the air, leading to a heavy impact with the ground and then the barriers. The incident left Davidson hospitalised with a broken back.  Davidson’s accident came just as the #7 Toyota had taken the lead of the race, however contact soon after with the revolutionary rocket-shaped Nissan DeltaWing started a number of technical problems that caused its retirement.  The #0 DeltaWing, invited to compete as a guest entry to showcase new and innovative technology, became a real fans’ favourite over the course of the event and ran well early on, competing at LMP2 pace.  It all changed when the Toyota made contact with it at the Porsche Curves, resulting in a heavy collision with the barriers. Despite the best efforts of its driver Satoshi Motoyama to try and get the car back to the pits, the DeltaWing’s race was over after just six hours. In the other classes, Starworks Motorsport won LMP2 on its first attempt with Enzo Potolicchio and Brits Tom Kimber-Smith and Ryan Dalziel.  Giancarlo Fisichella, Gianmaria Bruni and Toni Vilander won the LMGTE PRO class in their AF Corse Ferrari 458 Italia, while the Labre Competition Corvette of Julien Canal, Pedro Lamy and Patrick Bornhauser took the AM class honours.