The Honda Civics of Matt Neal and Gordon Shedden extend their championship lead, but current third place man Jason Plato is fighting hard to catch up 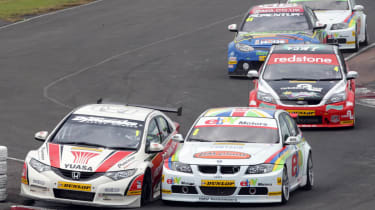 The Honda Civics were once again the dominating force, this time at the Croft circuit, with Matt Neal and Gordon Shedden both taking a win, with Jason Plato in his MG6 stealing the third victory of the day.

Neal placed in pole position after a scorching qualifying lap in the Civic, and although lost a couple of places at the start of the race, fought back against Robert Collard in the BMW, and team mate Shedden to re-take first place, going on to the win.

During the second race, Shedden didn't yield quite as easily, and after fighting off his Neal in the sister Civic, drove the car to a brilliant win. This Civic 1-2 finish signalled the seventh win in a row for the Team Dynamics-prepared factory Civics. Rob Austin took third place, his first podium of the season.

Due to a mechanical problem, Jason Plato was unable to compete in the first race, but the two-time BTCC champion regained some points when he took the win in race three, followed closely by Tom Onslow-Cole and Andrew Jordan, with the two Civics finishing fourth (Neal) and sixth (Shedden).

Although the two are just separated by one point, both of the Civics are now starting to pull out a championship lead from Plato, who is now 27 points off the lead.

The next round of this year's BTCC, will be held at Snetterton on 11-12 August. For more detailed race results and championship standings, visit www.btcc.net.