Derek Bell and a team of three injured military personnel from Mission Motorsport took to the Le Mans Classic, finishing in 15th place. 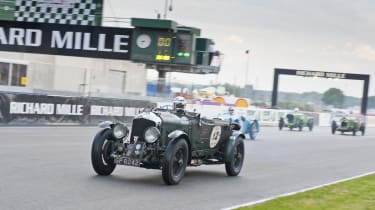 Competing in the Le Mans Classic race, Bell was supported by a three-man pit crew from Mission Motorsport – a charity set up to rehabilitate seriously injured military personnel through active involvement in competitive motorsport events.

After the race, Derek Bell commented: ‘It was an honour to have the Mission Motorsport lads as our support crew. They showed a real Le Mans spirit by working tirelessly on the car when we faced some major mechanical challenges and were fast and extremely focussed in the pit lane. It was genuinely hard to believe this was their first Le Mans experience or that these men are still recovering from some terrible injuries.’

Tony Compson, Gary Dunning and James Gillborn are like many others who have sustained life changing injuries during active service. The work of Mission Motorsport plays a key role in their rehabilitation, helping to restore confidence and physical fitness by placing them in competitive, team environments once more.