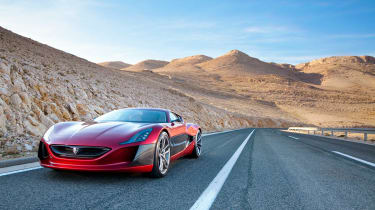 The Croatian-built Rimac Concept One electric supercar will be making an appearance at the Salon Privé event in London between 5-7 September.

The £638,000 ($1,000,000) supercar was first unveiled at the Frankfurt motor show last year, and is designed by former Pininfarina employees, with input from Vilner, the Bulgarian interior specialists.

Weighing in at 1950kg, the Rimac is powered by four electric motors and a 92kWh battery pack and the concept produces the equivalent of 1073bhp - which gives a 0-62mph time of 2.8 seconds. There's no clever range-extender hybrid technology, but the company has developed its own batteries.

Production will be limited to just 88 cars, and this wil be the first time the car has been in the UK, after visiting premier automotive events in Italy, Monaco, and France.