The six-week break has shaken up the pecking order of the teams somewhat, with a few surprise results at this Snetterton BTCC race. 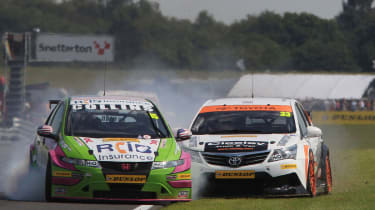 After a six-week break, the British Touring Car Championship has once again returned to Snetterton, with the usual post-break uncertainty providing some great racing. The DynoJet Toyota Avensis came back stronger than ever with a pole position and podium finish in the first race. Championship chasers Jason Plato and Andrew Jordan took the first two wins, with Dave Newsham taking the last win of the day.

Wrathall took the pole position in the Avensis, but was overtaken at the start of the race by Jason Plato's MG6. Plato took the win - his third this year - but Wrathall managed to hold off Andrew Jordan, who was attacking hard in the Pirtek Honda Civic.

Jordan dominated the second race, following a scappy collision between Matt Neal and Jason Plato, who were battling for the lead. Gordon Shedden did his best to get past in second, while Plato managed to recover on the track to take third place.

Dave Newsham took the third win of the day, with the Team ES Racing.com Vauxhall Vectra holding its own at the head of the field. Second and third place went to Tom Onslow-Cole and Jason Plato after Shedden was excluded from the race for exceeding turbo boost limits.

The next round of this year's BTCC, will be held at Knockhill on 25-26 August. For more detailed race results and championship standings, visit www.btcc.net.