Championship leader Matt Neal manages to maintain his lead after round seven of the BTCC at the Scottish Knockhill circuit. 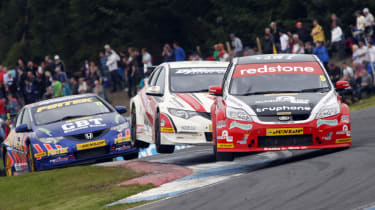 Robert Collard dominated the first two races at Knockhill, winning both races in his BMW 320si, with Dave Newsham taking the third win of the day in the Vauxhall Vectra. Matt Neal maintains his championship lead, now ten points ahead of teammate Gordon Shedden.

Plato started the day in pole position, but crashed out after a tangle with Aron Smith’s Redstone Racing Ford Focus. This gave Collard the lead and Tom Onslow-Cole the one-two positions to the chequered flag. Gordon Shedden finished in third position, with Matt Neal finishing down in seventh after a bad start.

The top three finishing positions stayed exactly the same for the second race, with the BMWs dominating once again. Jason Plato finished down in 11th after suffering problems with his MG's turbocharger.

Dave Newsham, after taking his first BTCC win at the last round, once again pushed the Team ES Racing.com Vectra to its limits, taking the win at his local circuit. Both Gordon Shedden and Jason Plato retired, which along with a strong third place finish from Matt Neal, re-shifted the championship lead back into Neal's favour.

The next round of this year's BTCC, will be held at Rockingham on 23 September. For more detailed race results and championship standings, visit www.btcc.net.