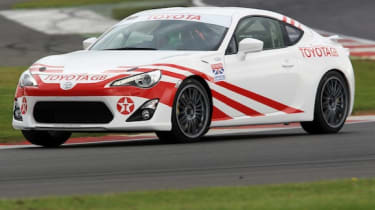 This weekend sees the 8th running of the Britcar Silverstone 24-hour race, and evo will be in thick of the action with a drive in one of the most interesting cars on the grid: Toyota Team GB’s new GT86 racer.

The virtually standard Production Class GT86 has been built by GPRM, the team behind Toyota Team GB’s back-to-back BTCC titles in 1986 and ’87 with a Corolla AE86 driven by touring car ace, Chris Hodgetts.

Hodgetts is making an emotional return to racing for the Silverstone 24-hours, coming out of retirement to drive alongside his son, Stefan, a front-runner in the one-make Clio Cup series. Toyota Team GB’s driver line-up is completed by evo’s Dickie Meaden (a veteran of no less than fourteen 24-hour races) and experienced racer Neil Primrose, who’s day job is being the drummer in the band Travis.

TTGB’s GT86 is competing in Class 4, the biggest and most varied class in the race. Rivals include everything from Synchro Motorsport’s unfeasibly quick Honda Jazz to a Jaguar XF-S, BMW M3 E46, assorted Seat Leons, a Ginetta G40 and another GT86, prepared by Martin Short’s hugely experienced Rollcentre Racing squad. The Toyota is far from the most powerful car in the class, but with slick-shod 18in wheels, race suspension and huge AP Racing brakes it promises to be mighty through the Silverstone GP circuit’s challenging corners.

Primrose and Meaden are due to test the Toyota for the first time at Silverstone tomorrow, prior to build-up for the race weekend commencing on Thursday with scrutineering, followed by an intensive day of practice and qualifying sessions on Friday. The race itself starts at 3.30pm on Saturday afternoon.

As ever we want to try and get you as close to the action as possible. Meaden will be blogging throughout the weekend here at evo.co.uk, as well as Tweeting live from the pitlane (follow @DickieMeaden), while Toyota will be updating its own blog, www.blog.toyota.co.uk, with news, images and video.

You can follow the race with live commentary via our friends at Radio Le Mans and we’re even hoping to have live in-car video streaming during the race. Of course if you want to head to Silverstone for the race then be sure to find the Toyota Team GB pit garage and wish them luck.